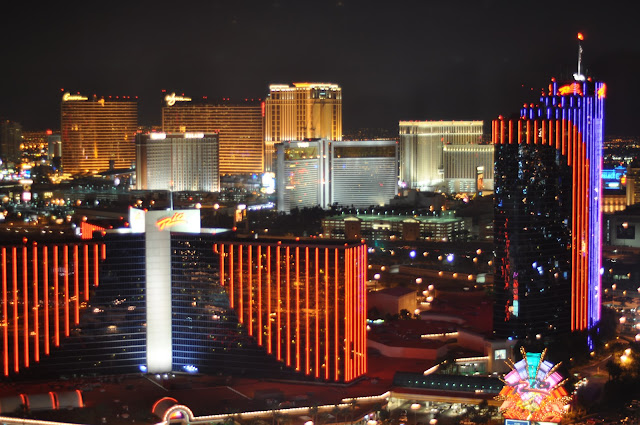 Well friends, for someone who claims to never go down to the Las Vegas strip, I certainly have a lot of photos to share with you!
I've decided since Las Vegas is notably a New Year's destination for some, what a better time to give you a taste of some eye candy from my home town.
I took these photographs on two different occasions in December 2010;
A Holiday Party at the Ghost Bar which is at the "top" of the Palms Hotel,
and on another occasion during my MIL's visit we went to see an amazing show at the Wynn Hotel, called
Le Reve
So, without further ado, I hope you enjoy the sites and sounds (Frank Sinatra, Dean Martin, Elivs)
I've put together for you from Las Vegas. 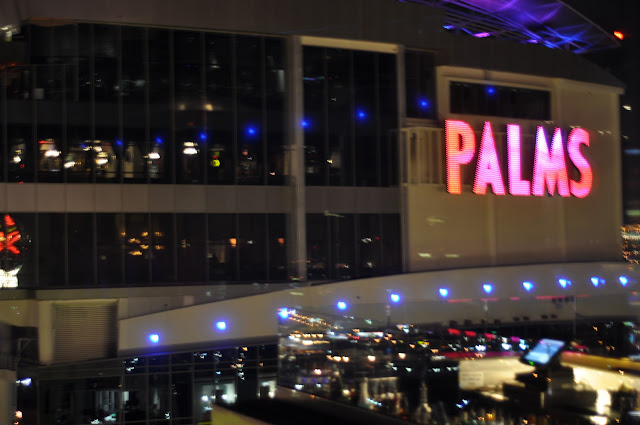 A lot of reflection from the glass that surrounds the patio on the rooftop deck.
A view looking down the side of the Palms Hotel.  A portion of the floor on the deck is see through.  (That's my shoe) 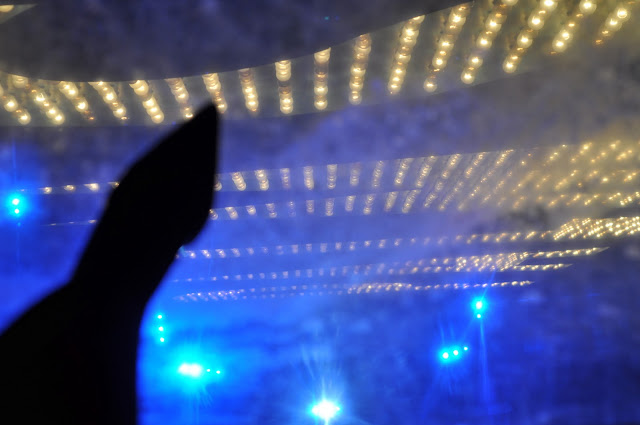 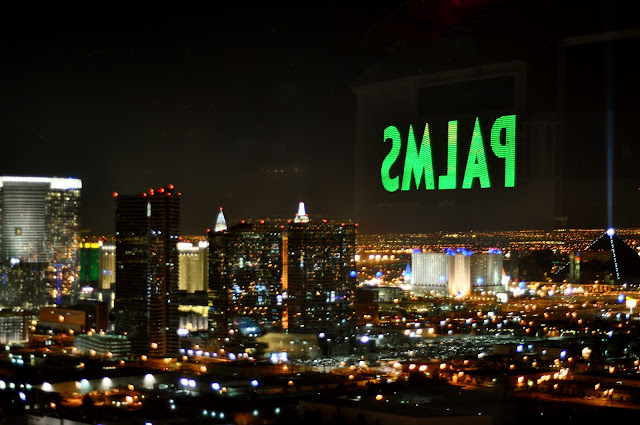 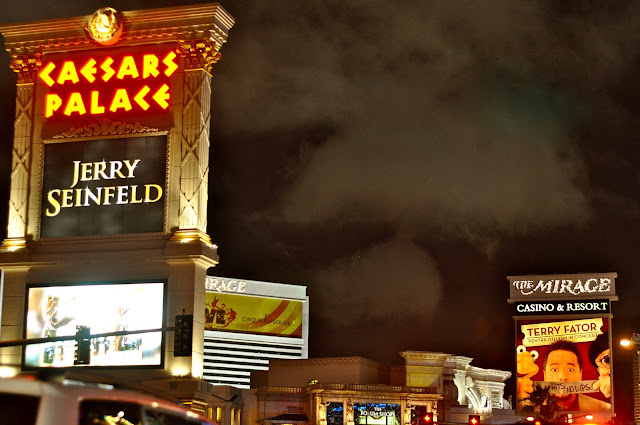 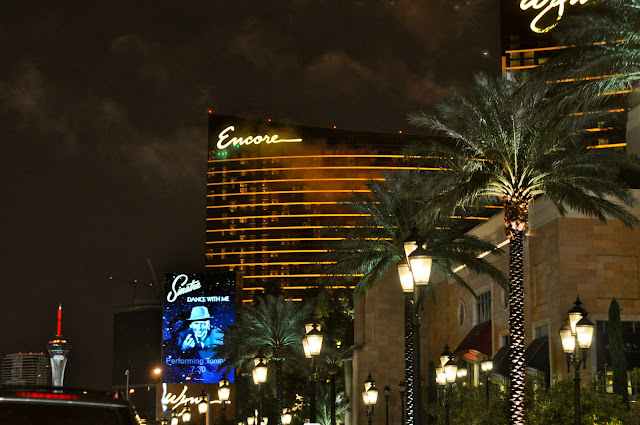 The night we went to see Le Reve at the Wynn it was raining.  It had been raining for about 3 days in a row which was strange,  but it made for some really cool shots.  The clouds and fog were so low it covered some of the hotels.
Eiffel Tower, Paris Hotel Las Vegas, Planet Hollywood in the background 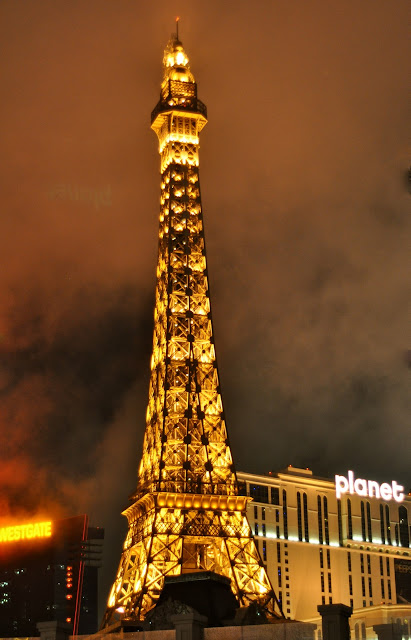 Inside Wynn Las Vegas on the way to the show 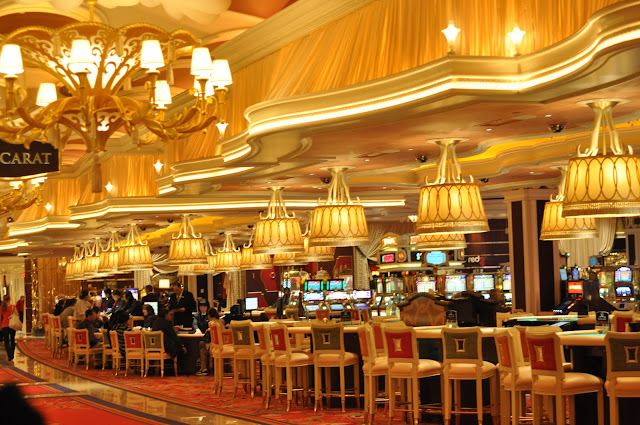 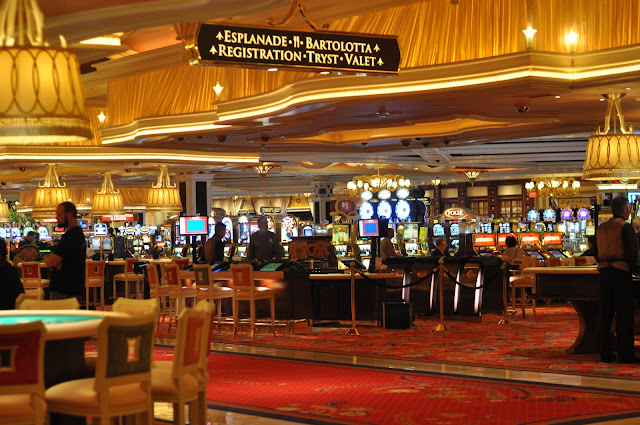 Inside the Wynn Theatre.
The water is the stage area.  I took photographs before and after the show.
No photography was allowed during the show. 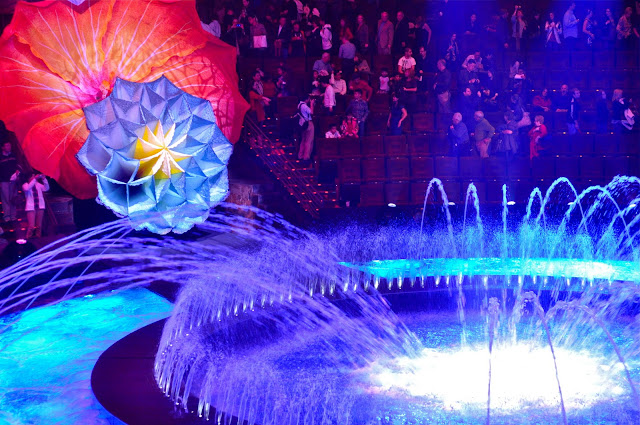 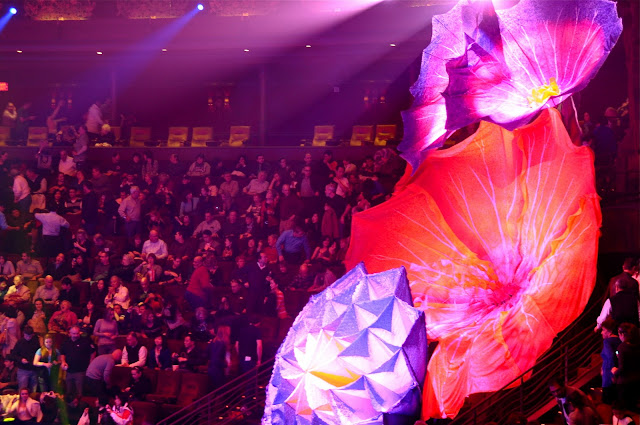 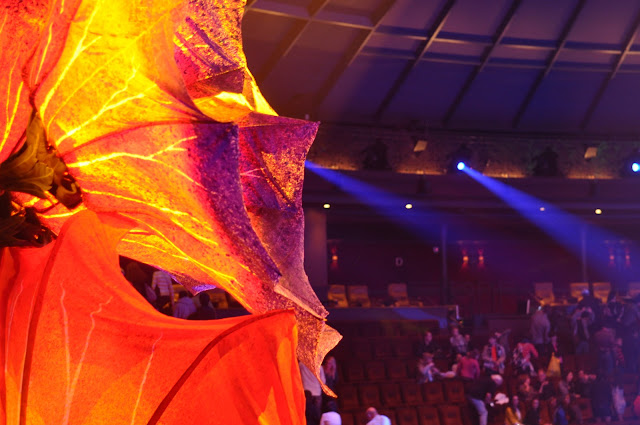 A feast for the eyes from all sides before and after the show.  I could not stop taking photos.  The light and colors were amazing! 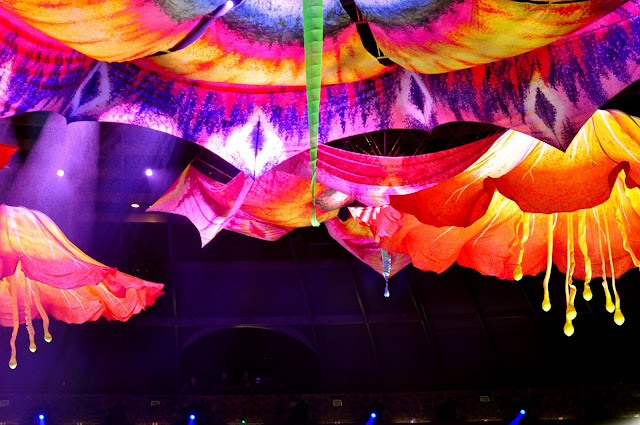 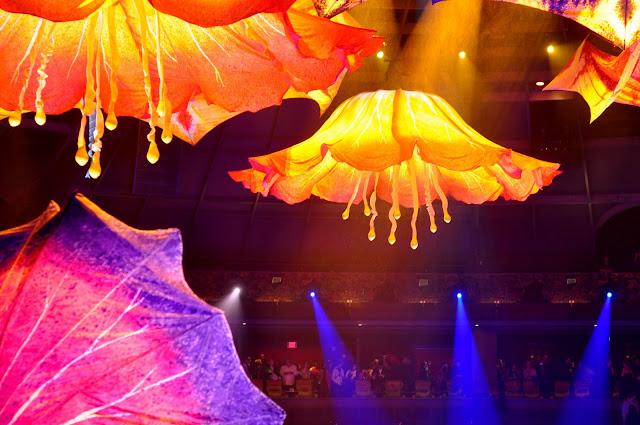 For someone that rarely gets to see rain and fog, I was almost as fascinated with the show outside as I was with the show inside. 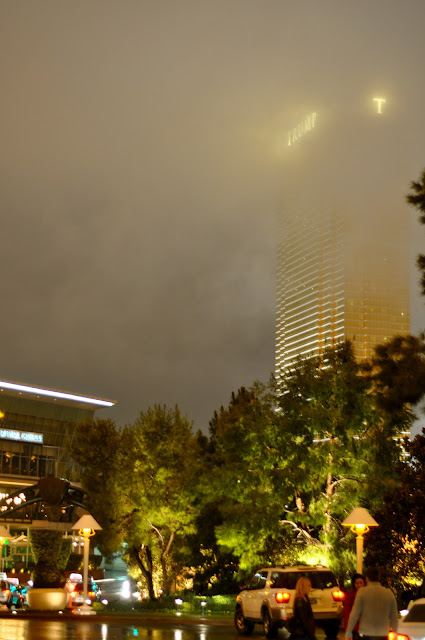 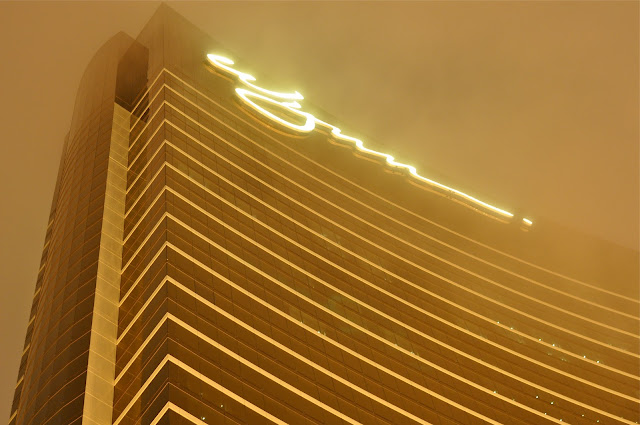 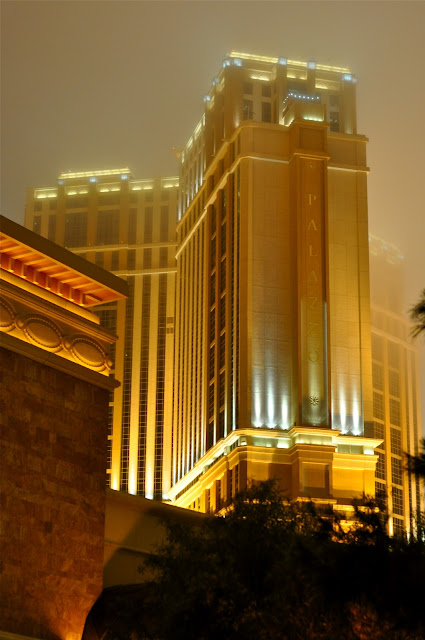 Remember, these photos were taken a few weeks ago.  I don't think you could "drag" me down to the Strip on New Year's Eve.  I'll be watching the events on TV from the warmth of my home!
How about you?  What are you doing New Year's Eve? 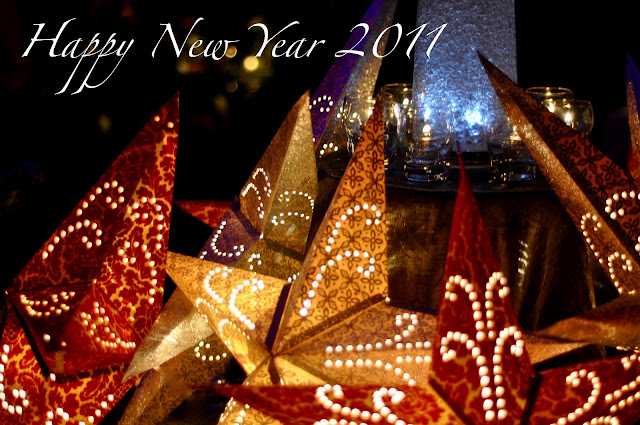 Unknown said…
WOW... These photos look great.. I love the one with the fog. You really don't see that much here in Vegas.. I also love the ones with the reflections.. Very cool..

Lisa Gordon said…
Just fantastic Becca!
Thank you for sharing, and I wish you a wonderful New Year!

Paula said…
Thanks for the wonderful glitz and glamour Becca. LOVE the Wynn Theatre show. Sooo quiet this year ... having an extra long stay with my (elderly) parents and our mighty toddler. An early night, fireworks on TV :)
December 30, 2010 at 7:31 PM

Catherine said…
I can imagine the Vegas Strip would be a crazy nut house on New Year's Eve! That would be MUCH to MUCH excitement for this gal! :)

It's a quiet evening with hubby, popcorn and movies for me.

Becky Shander said…
Seeing all of this action makes me feel like I should get out more, but not tonight...tonight I will stay in and quietly welcome 2011 with my family. Happy New Year...I hope it will bring you much joy.
December 31, 2010 at 5:00 AM

lilylovekin said…
You have some beautiful photos. Would you believe this girl who loves to camp spent her 50th birthday in Las Vegas! It is a great place to party. Wishing you a happy New Year.
December 31, 2010 at 7:49 AM

Justine said…
I have always wanted to go to las vegas and you have made it sooo appealing, what a wonderful collection of amazing photograph, hope you have a wonderful new year, see you in 2011
December 31, 2010 at 8:59 AM

Brenda Pruitt said…
Well Becca, I'll be right here in my house. I'm not going out amongst the drunks. Oh, that place does have magnificent sites. I was there once years ago. Big lights, big city. Happy New Year!
Brenda
December 31, 2010 at 1:13 PM

Halle said…
We're just walking across the street...although with the freezing rain we've had that could be treacherous in itself!
Love the photos! Haven't been back to Vegas since we got married there almost 17 yrs ago!
December 31, 2010 at 2:07 PM

Unknown said…
These are fabulous you have captured the atmosphere so well. I had my first Vegas New Years a couple of years ago and your photos bring back so many wonderful memories for me. Wishing you a very Happy New Year!
December 31, 2010 at 2:29 PM

I especially love the Strip skyline with the Palms title reflection appearing backwards... and, of course, all the fog ones. Lovely, lovely!

Thanks for sharing your images from your LV Blvd. excursions this month :).

Caterina Giglio said…
simply gorgeous shots, Becca! I lived in Vegas twice and it is fun to see how beautiful it still is and what a happening town it is! your foggy, misty shots are spectacular!! happy new year! xx's
January 1, 2011 at 6:54 AM

Oregon Gifts of Comfort and Joy said…
Becca, those are beautiful! They make me want to go and visit once more, but my husband has sworn off Vegas. Thanks for sharing these!

Lorraine said…
this takes me back to when I got hitched at the little white wedding chapel! hope you had a good christmas and let me wish you a happy new year
January 1, 2011 at 12:43 PM

Sonia said…
Hi Becca
Thanks for sharing great pictures. We love Vegas our last visited was Nov 29 to Dec 10 /2010... wonderful days.
We (my dh and me) was visited this time Casino Palms of course others Hotel-Casino.
Greetings from Puerto Rico.
Happy New Year

Jillayne said…
The glitz and glam of the strip is eye-catching but what I really like are the pictures with the sky - it looks amazing! You must have been very excited ; )
January 2, 2011 at 9:41 AM

~Lavender Dreamer~ said…
Amazing photos! We just loaded some photos on our digital photo frame today and included some we took there a few years ago...at Christmas time! I would love to be traveling out West again! Happy New year! ♥
January 2, 2011 at 5:42 PM

Lynn Stevens said…
Fabulous photos Becca, Thanks for sharing your Home town with us, I Love all those colors, The show must have be awesome!!!!
January 3, 2011 at 10:36 PM

Anonymous said…
As a permanent firework !

I had writteng a note about foot, but did'nt want to pass.

Anonymous said…
I can imagine that celebrating the New Year in Las Vegas is fantastic!
I spend my New Year's Eve in Rosario hotels with my family and we had an amazing time together!
February 8, 2011 at 10:57 AM

Popular posts from this blog

The Art of A Rain Chain 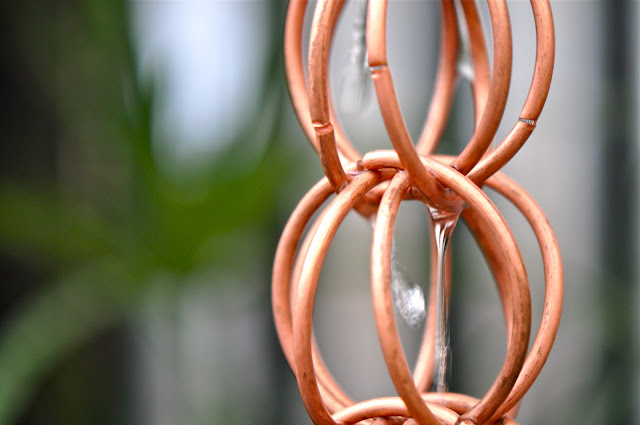 "Art"   is probably not the first word that comes to mind for most people when it rains.  If you have ever seen a  Rain Chain   then maybe you'll understand why I think of it this way.  copper, metal, patina, design, texture, beauty... peaceful,  mesmerizing... If you've read my blog for some time, you might remember, this "desert girl" is fascinated with  rain chains. :-) I'm still traveling...Seattle...it's raining... I'm sharing my Rain Chain Art this week at Lisa Gordon's  Creative Exchange I have been reading and enjoying your comments. When I'm back home, I will have more time to visit and get caught up with you.  Hope your week is off to a great start!  Becca
Read more 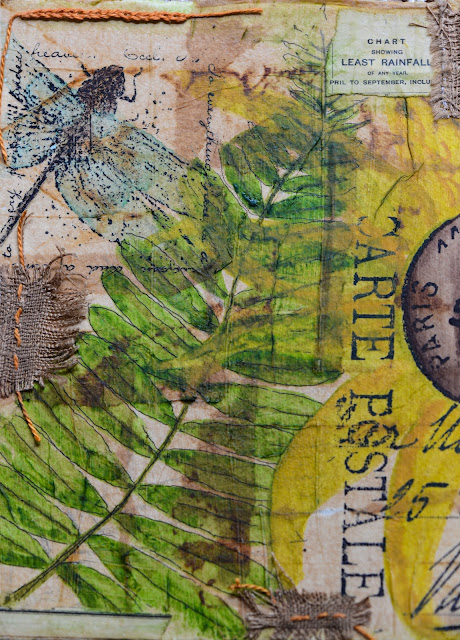 Hello Friends!  Hope you are enjoying your weekend, especially  if this is a long weekend for you!  It seems like I've been drinking a lot of tea lately, so I  thought it was time to get out my tea bags  and get creative!  This is a mixed-media piece on watercolor paper. First, I tore pieces of the tea bags and glued them to the  watercolor paper to start my background. This is another piece I started just today where I decided to use a rubber stamp before applying the tea bags for added interest.  I love the color and texture the tea bags create.  After the background was dry, I started to sketch out my design.   The dragonfly is a rubber stamp. Finally, a little simple hand stitching on linen for added texture. The light was so beautiful and inviting on my desk today. Oh, and don't you just love my new pencil box I got at the  second-hand store for 97 cents?
Read more 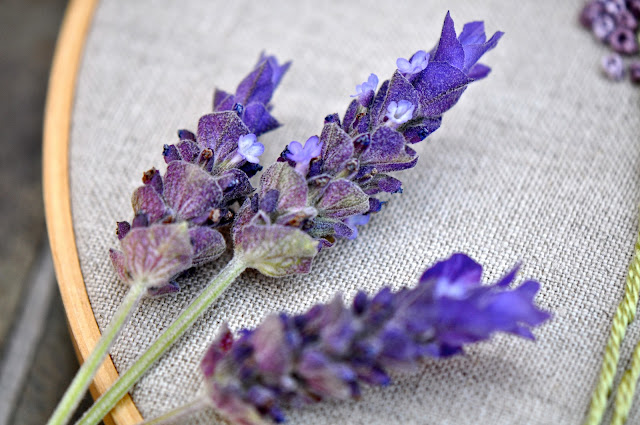 Hello everyone!  No, I really don't have "the blues."  I've just been doing free hand embroidery while listening to some jazzy/blues by  The Eddie Higgins Trio (If you care to listen, this is their rendition of Black Coffee) (note...you always have the option to click pause/stop on my sidebar) So, back to the embroidery. Lately, I've been inspired by lavender...again. Our mild weather as of late has been ideal for my lavender container plant. I also find so much inspiration on the internet! If I get stuck for an idea I just "Google" whatever it is I'm looking for and there it is. In these pieces I used the french knot, stem stitch and back stitch on linen fabric. If I don't know how to do a certain stitch I can usually find a helpful video on YouTube. I haven't decided what to do with these pieces yet. Possibly a pillow?   The hydrangeas are rather small, so maybe I could incorpora
Read more

Becca
Carnation, Washington, United States
Thank you for visiting! This is where I share my photography, crochet, mixed-media art, sewing, embroidery and other crafty adventures! I hope you find your visit here relaxing and inspiring!